A home win and a clean sheet for Florian Kohfeldt and Werder! The Green-Whites came away 2-0 winners as they beat FC Augsburg thanks to two late goals from Theodor Gebre Selassie and Felix Agu. Following a quiet first half for SVW with a solid defensive performance, Kohfeldt’s team stepped up their game after the break and were rewarded for their efforts with three points. Theodor Gebre Selassie broke the deadlock in the 84th minute as he converted a deep cross from Felix Agu, before Agu himself struck just three minutes later to seal the victory for Werder (87’).

Line-up and formation: Werder head coach Florian Kohfeldt made two changes to the team that started away at Bayer 04 Leverkusen. 21-year-old Felix Agu made his full debut in the Bundesliga as he came in to replace the injured Ludwig Augustinsson in left-back. Meanwhile Davie Selke replaced Tahith Chong, starting a match for the first time since the opening day defeat against Hertha BSC. The 25-year-old lined up alongside Josh Sargent in a two-man attack for the first time in a while. in addition, Milot Rashica also returned to the match day squad, however Niclas Füllkrug was missing after picking up an ankle injury in training on Friday. 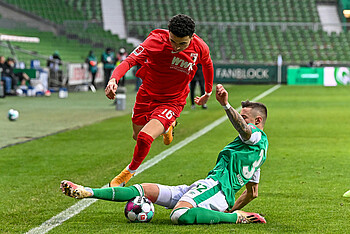 12th minute: Penalty shout for Werder! Kevin Möhwald whips in a great free kick to the far post and Milos Veljkovic is brought down by the Augsburg defender, but the referee waves away the complaints.

13th minute: A corner is whipped in by Möhwald and Maxi Eggestein rises highest from the pack to meet it with his head, but it flies just wide. The best chance of the match so far!

18th minute: Marco Friedl wins the ball back on the touchline, but misplaces his pass and the ball is laid off to André Hahn by Alfred Finnbogason. The Augsburg winger aims for the corner but sees his effort go wide.

29th minute: Daniel Caligiuri holds his ground against three Bremen players and crosses right across the face of Jiri Pavlenka’s goal, but there are no teammates to meet it.

34th minute: Kevin Möhwald swings another good free kick into the Augsburg box, Josh Sargent nods it onto Theo Gebre Selassie. The captain’s header does not challenge Rafal Gikiewicz, who is able to safely catch the ball.

38th minute: A free kick for the visitors is floated into the Werder box by Daniel Caliguiri, however it is no challenge for Pavlenka who climbs to hold the ball and avert the danger. 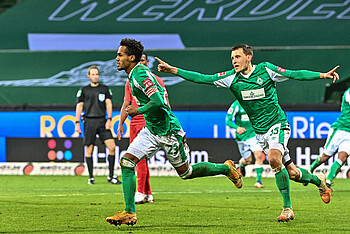 46th minute: SVW start the half strong as Maxi Eggestein collects a long ball from deep, before turning to fire in a long-range effort but it doesn’t trouble Gikiewicz.

51st minute: Daniel Caliguiri jumps to head a good cross from the right-hand side towards goal, forcing Jiri Pavlenka into his first real test of the day. A great save!

61st minute: Kevin Möhwald passes to Maximilian Eggestein who makes a good run in the box but has his shot blocked by an Augsburg defender, and it comes to nothing.

63rd minute: Florian Niederlechner plays it across to André Hahn in the penalty area, but Marco Friedl is on hand to slide in to clear the ball for a corner.

64th minute: FCA’s Reece Oxford jumps up and heads a dangerous corner just a few inches over the crossbar.

65th minute: So close! Josh Sargent receives the ball on the right-hand side of the box and takes on the shot early. Rafal Gikiewicz is on his toes to keep out the American though, as he deflects the attempt wide of the left post with his feet.

78th minute: Marco Friedl attempts an effort from outside the box, but his effort too far off target to worry the keeper.

84th minute: GOAL FOR WERDER! Jean-Manuel Mbom lays the ball off to Felix Agu, who crosses it from the left-hand side to the far post. It lands perfectly with Theodor Gebre Selassie, who reacts brilliantly to meet it first-time and put the Green-Whites ahead with a magnificent finish! Advantage Werder!

87th minute: GOAL FOR WERDER! Werder double their lead in less than three minutes! Romano Schmid does well to keep the ball in on the sideline before exchanging a one-two with Maxi Eggestein. The young Austrian whips in a great cross and finds Felix Agu in space at the back post, who converts to put Kohfeldt’s team two goals up!

90+2 minute: Jiri Pavlenka makes himself big to earn his clean sheet, as he keeps out Florian Niederlechner.

Conclusion: In a relatively uneventful first half, Florian Kohfeldt’s team made life difficult for the visitors from Bavaria with a convincing defensive display. After the restart, it was Werder who emerged as the stronger team. Despite some chances for Heiko Herrlich’s side, it was Werder who broke the deadlock through Gebre Selassie, before full debutant Agu was on hand just three minutes later to seal the victory in the wohninvest WESERSTADION. Ilia Gruev also made his debut late on. A deserved win for the Green-Whites!

“I flew under the radar a bit during my youth ca ...

"I want to iron out the inconsistencies"

Baumann: “We completely understand the decision”

01.03.2021 / First Team
Your web browser ist outdated.
The web browser you are using is no longer supported.
Please download one of these free and up to date browsers.
Why should I use an up to date web browser?