“We need to show fight and desire”

Preview of the first game of the Rückrunde against Hertha BSC

Despite the strong performance against Borussia Mönchengladbach on Tuesday, head coach Florian Kohfeldt could not be satisfied following the match. Only one thing matters to Werder’s coach at the moment, and that’s the number of points on the board. Kohfeldt was hesitant to underestimate Saturday’s opponents from the capital on Friday’s pre-match press conference, in spite of the Berliners’ recent run of poor form. “We know that a tough task awaits us. Hertha have a lot of individual quality, especially going forward,” emphasised SVW’s head coach as he looked ahead to the first game of the Bundesliga Rückrunde (18:30 CET).

The squad: Although the midweek fixtures have led to a few tired legs, the Green-Whites have not picked up any new injury concerns from Tuesday night’s encounter at BORUSSIA-PARK. “One or two of the boys have remarked on how often they’re playing at the minute,” said Kohfeldt. However, the team has coped well with the shorter rest and recovery they’ve had recently. Ömer Toprak in particular has impressed the Werder boss: “Ömer is in the best condition we've seen him in so far since he joined us. Nothing should stand in the way of him playing the full 90 minutes.” Accordingly, no changes to the squad are expected from the midweek game.

Focusing on our own game 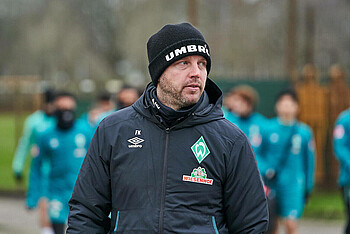 Florian Kohfeldt knows how much quality is in the Hertha squad (nordphoto).

The head coach on the game: Florian Kohfeldt was keen to emphasise that although Hertha are underperforming their own expectations at the halfway point of the season, this does not change how he intends to approach the match. “We're facing a team this weekend whose position in the table does not at all reflect the quality in their squad,” said Kohfeldt. Proof of this is the 4-1 defeat inflicted on the Green-Whites in the opening game of the campaign. “The first game of the season was the worst we've played so far, along the with the game against Union Berlin, and that's front and centre in our minds.” Kohfeldt is expecting a strong opponent on Saturday night: “Hertha will give it everything they've got to win the game tomorrow. What we need to do is focus on our own game and show fight and desire out there on the pitch in Berlin.”

The last meeting: The last meeting between the sides was the first and last game of the season with fans. 8,400 spectators flocked to the wohninvest WESERSTADION for the first time since February for the first game of the season, but despite this support, the Green-Whites were soundly defeated 4-1 by Bruno Labbadia’s side. Davie Selke netted Werder’s consolation goal against his former club. The last time Werder travelled to the Olympiastadion, the match ended all-square at 2-2 in the last game before the Bundesliga was paused for two months due to the pandemic earlier in 2020.

A strong record against the Berliners

Davie Selke scored against his former club in Bremen (nordphoto).

An advantage on paper: In contrast to the showing earlier this season, Werder dominate the head-to-head record between the sides. The Green-Whites have won 36 out of a total of 75 games with Hertha, with 19 draws and 20 losses to the ‘Old Lady’. However, Florian Kohfeldt's team have failed to win the last four encounters with the side from the capital, drawing three and losing one. Hertha last beat SVW in Berlin in 2013 and since then, Bremen have picked up at least one point from every game in the Olympiastadion.

Neck-and-neck in the standings: Even before the turn of the year, Bruno Labbadia’s team were underperforming their own expectations, having had the worst Hinrunde in 11 years. Hertha currently sit in 14th place with 17 points, while Werder are in 13th with one more point to their name. The winner of Saturday night’s clash will therefore put more breathing space between them and the relegation zone and jump ahead in the table. The opening day defeat offers little in the way of insight for how the match will turn out. As Marco Friedl pointed out ahead of the encounter, “There have been a lot of games since then and we are definitely at a better level than we were on the first match day.”

“I flew under the radar a bit during my youth ca ...

"I want to iron out the inconsistencies"

Baumann: “We completely understand the decision”

01.03.2021 / First Team
Your web browser ist outdated.
The web browser you are using is no longer supported.
Please download one of these free and up to date browsers.
Why should I use an up to date web browser?